We bought our tickets to Dong Hoi early this morning and chose to risk just purchasing 2 seats. We were a little concerned as there was another German couple catching the same train, who told us they had difficulty purchasing tickets a couple days ago to Hue. Thankfully we managed to score two other empty seats the whole journey – phew!

We watched a couple of shows, walked around the train and TRIED to communicate with the locals on the train, but it was just impossible, and that was even using google translate.

It was interesting to walk through the different carriages and see the various options of travel available:

* the soft-seater with air con and only one carriage assigned (this is the one we were in).

* hard seater with no air con/smoking.  The windows here have cages to stop any rocks/objects from hitting passengers.

* a carriage assigned as an eating area 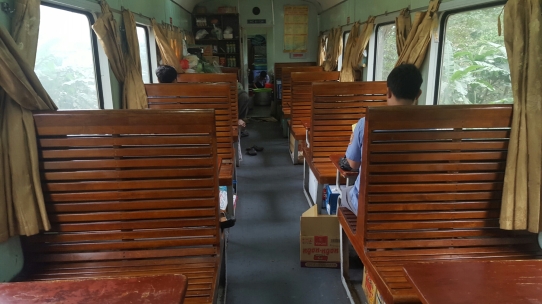 As Mr 4 and I walked through the carriages there were some who stopped us to say hello and they wanted to interact with Mr 4.

For lunch time you could purchase the following set chicken menu.

We also bought a very interesting meat type cake with some rice flour gelatin and meat filling that was wrapped in leaves and boiled. Quite tasty.

Across from us sat a lovely older couple who kept speaking to us and we couldn’t understand a thing. I believe they were asking how old the boys were and where we were from. I tried to use the Google translate app, but they seemed to find this amusing. I was later told they must have been amazedat how I was able to translate from English to Vietnamese. The local peolle are really warm and would give the boys sweets or want to give them hugs and kisses. Thankfully I am not too freaked out by that but can see how others would find this a bit over the top 😅

We finally arrived in Dong Hoi after a long day of travelling and we were ready for time-out and dinner.

Tomorrow we do Paradise Cave and Phong Nha cave.