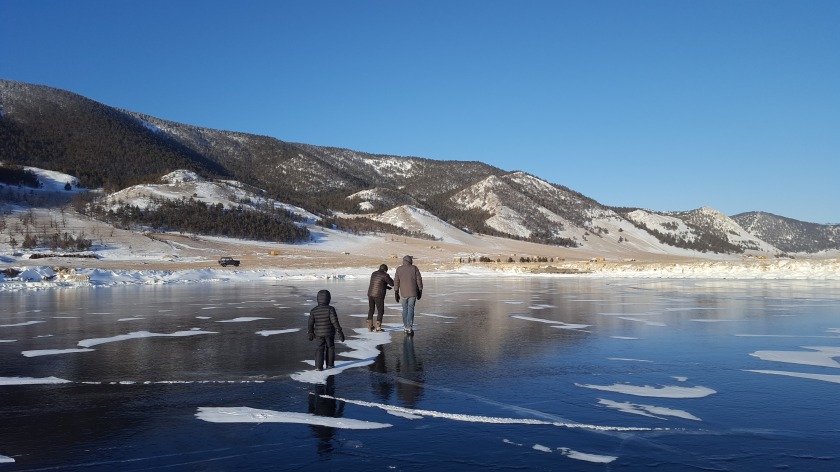 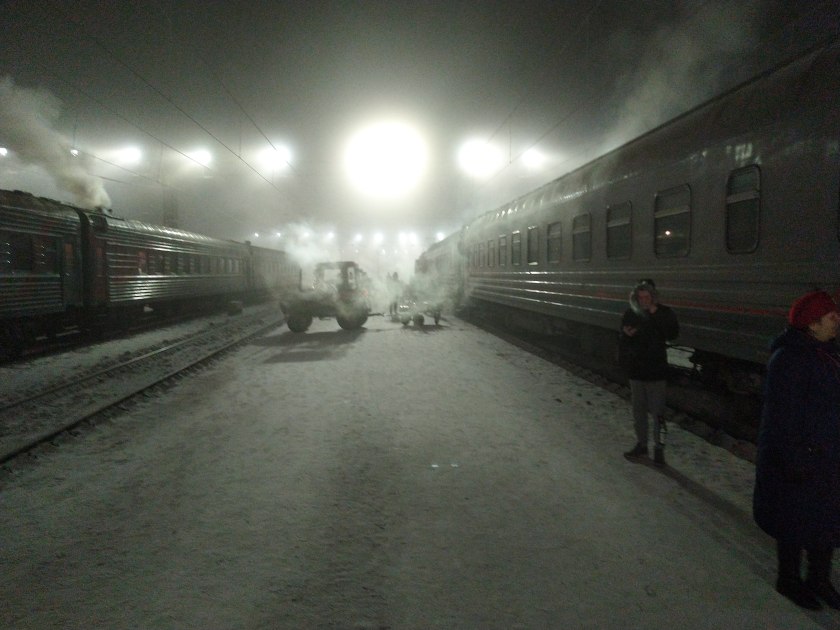 On the platform just outside our train was a man with a short, stocky build and a warm look on his face. He smiled at me as I got off the train. I knew that this must be Vladimir from Eastories who was coming to pick us up. We briefly exchanged names and he was quick to grab my bags and greet the boys as he led the way out of the station to his jeep.

The air was dry cold and we eventually got to the jeep. He pulled out a big bear skin and placed it and other fur jackets on the seats. I hadn’t actually dressed too warmly because I figured we would be sitting in a warm car for the next 3 hours. How wrong was I! The boys were covered up, and Mr 5 fell back asleep under the jackets.

The windows were completely frozen from the inside. He had the heater on full speed so that the windscreen would not freeze over. The jeep was bumpy, noisy, but so far I was still warm.

It wasn’t long before I could feel a chilling breeze on my bottom legs and feet. I thought that maybe it was just me and surely it shouldn’t feel cold in the car?! I couldn’t take it anymore and I asked him of there was a heater at the back. With his little English he just shook his head and pointed to the windscreen, which meant that all the heat was at for the front window. He stopped the car and readjusted the big skin around my legs. I was thankful as it did help, but the problem was my feet were frozen and it was going to be very difficult for them to get warm again if cold air was still coming through.

Half way we stopped at the service station to refuel and I took this opportunity to swap seats with Jason who was at the front. This made all the difference in the world and I defrosted and was happy again. Unfortunately, Jason felt what I did and it was his turn to have freezing feet.

We arrived to the little village of Buguldeyka and breakfast was awaiting us. We settled in to our little farm house. For some reason he told us that the water heating system was down so we would be using the fire and heater. I sure hope we stay warm!

It isn’t long before Voloyda came to take us to Lake Baikal. We drove on the frozen river, through the town and soon were by the lake. My words fail to express the magnificent feeling of being at this place.

We stood by the lake and he threw some rocks on the lake and then signalled that we walk over it. I was sceptical, because I didn’t think we would be able to find much frozen seeing as the best time to do so is in Feb/Mar. We were all in awe of being at the lake surrounded by mountains and feeling something magical. However it was so cold that even our mobile phones and GoPro suddenly turned off from freezing. I managed to take a couple of photos, but even so my hands copped the cold everytime I took them out of my gloves! 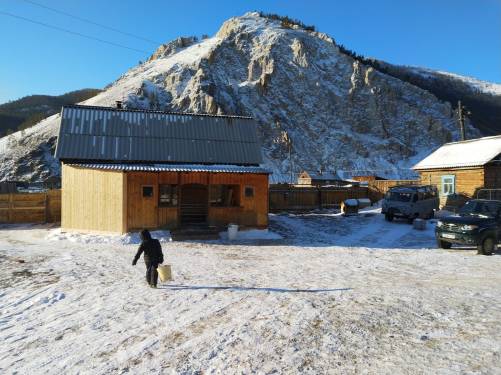 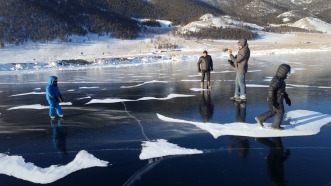 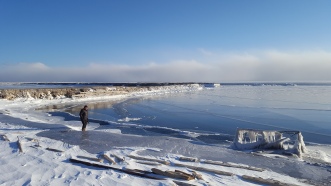 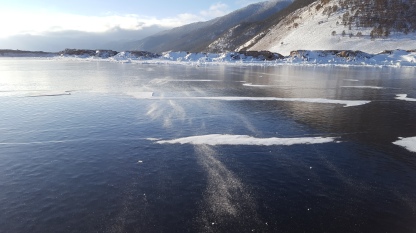 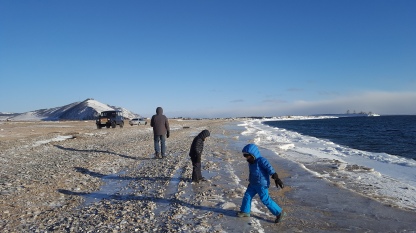 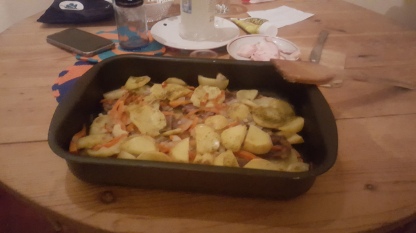 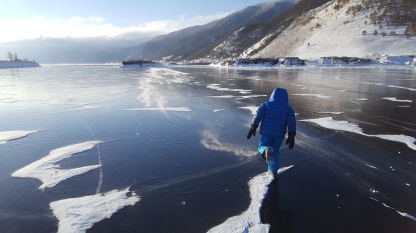 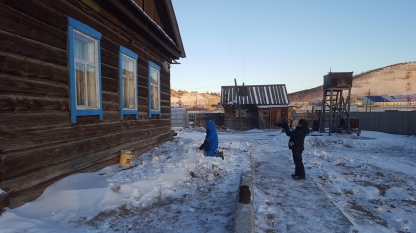 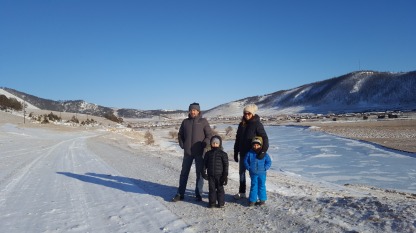 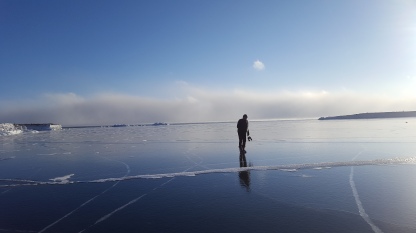 That evening, Jason took the boys to play at the playground. They got to slide down with the local children. Unfortunately Mr 5 had an accident where we thought he may have broken his arm because he couldn’t move it.

That evening Vladimir took Jason and Mr 5 to a local Dr and give him an injection to help him sleep.

Mr 6 and I enjoyed a Banya until the return from the Dr. We ended up having our dinner late because of the unexpected Drs visit.

Vladimir delivered the food to our house and then stayed. He brought with him a bottle of vodka and we enjoyed listening to his stories and how he “blessed us” and did all sorts of ceremonial chants in his indigenous language. He tried to explain the history of his people and his religion of shamanism. He would hold our hands and feel our energy. It was truly a mystical experience.

The next day he took Mr 5 to the hospital that was about an hour’s drive in order to get an x-ray because he still was in a lot of pain. Thankfully the verdict was that he didn’t break his arm, but was badly hurt and contusions. The plan was to massage the arm and it would heal in a couple of days.

That evening he took us to see the marble quarry and up the top of the mountain to view Lake Baikal. It was beautiful, but unfortunately the photos didn’t turn out so good as it was dusk and lighting didn’t help. 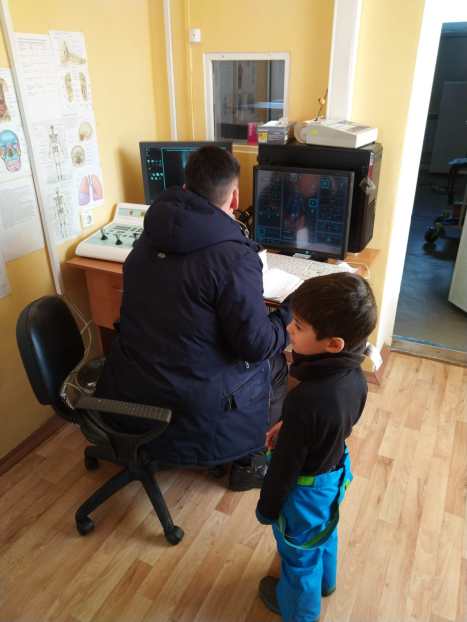 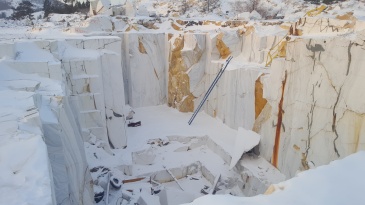 He took us the next day to play in the river with tabbogans and funnily enough this is where Jason fell slightly into the river and wet his pants, shoes and gloves. The jeans froze rock hard within minutes of getting wet!

Vladimir took us to see how the cows drink water when the river is frozen over. What they do is break up the ice in sections, so that they drink from it. The boys enjoyed helping to dig holes and watch the cattle.

On the last night, his brother and his wife along with their son took us out to the lake in the evening and we spent time climbing the mountain and they dug a hole to fetch some water for a cuppa. It felt mystical and we were a littlr sad that it was all coming to an end.

It was time to leave Buguldeyka and set off for part 2 of our trans-siberian journey. This time we were headed to Harbin.