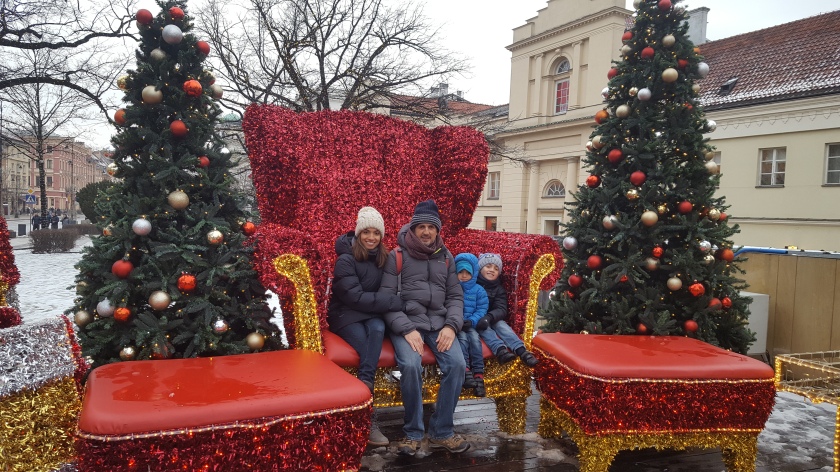 Our journey to Warsaw started with the train being delayed by 75mins. The sign kept changing from 30mins to 45mins to 80mins and then 75mins.

The train journey was ok. There were issues with heating in our carriage, which felt like a fridge compared to the other carriages. It took just under two hours for them to rectify this. 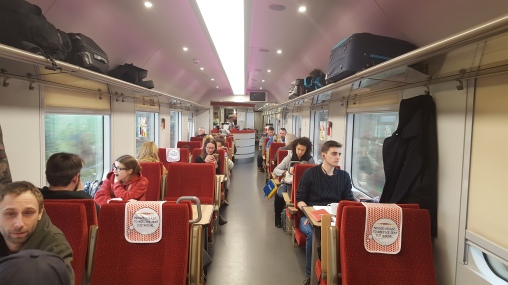 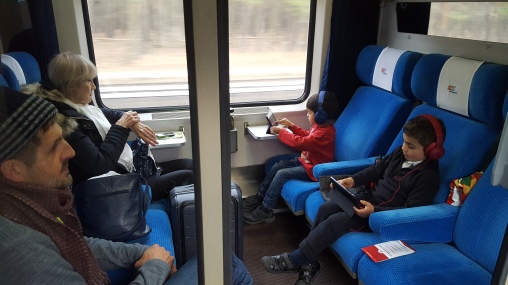 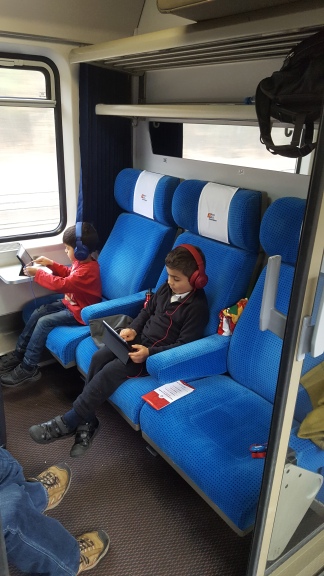 Once we got off the train, everything happened so quickly. We were warmly greeted by Marta, a friend of Jason living in Warsaw, whom he hadn’t seen in 25yrs! 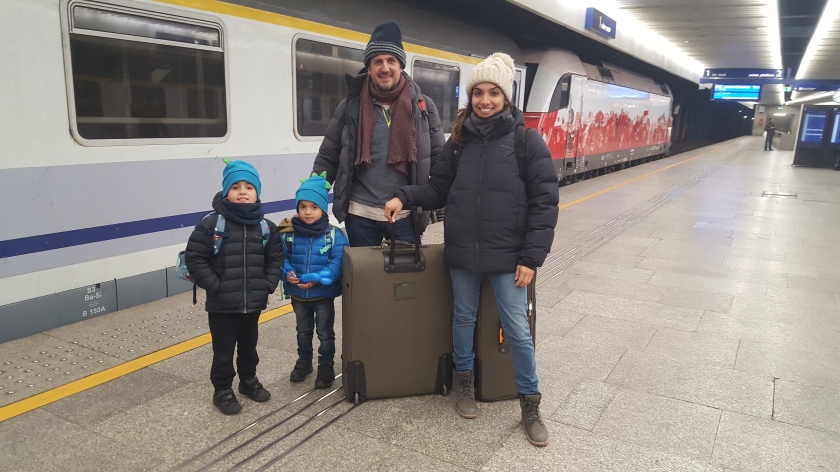 The station was swarming with hurrying bodies to and fro. We walked through a huge mall to get to the car park. I had forgotten how close to Christmas it was and how crowded the shops can be.

The family welcomed us into their home with a traditional polish dinner.

We tried gołąbki also known as “pigeons” in English- not made out of pigeons though. It is a meat based dish that is covered in cabbage leaves that have been steamed/simmered or fried softened. They are served with a delicious tomato salsa on top.

This is something you should try if you’re in Poland. 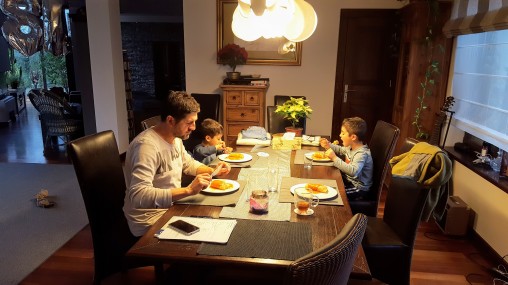 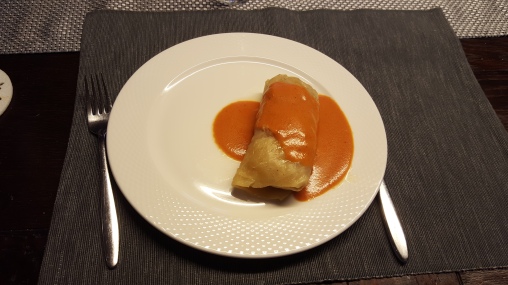 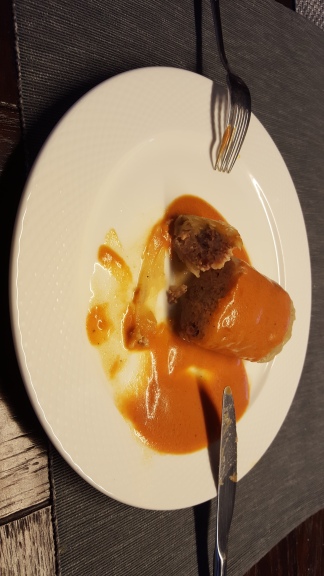 The first night we arrived we ate polish dumplings called “riskie pierogi” with potatoes and cheese filling. The boys devoured this.

We also tried some traditional salads with herring, potato and veges.

Overall, polish food and deserts are quite unique and definitely something worth savouring.

This part of the town gives a glimpse of what Krakow looked like before the second world war, as it has been restored.

We had an early train departing at 7:45am. The platform number was not easy to follow when it changed. The polish system has a platform number and a track number. So if you’re travelling by train- take note it’s different from Australia.

It was 7:46am and there was still no sign of our train on platform 3. A train finally arrived at 7.50 but when we asked a young girl about our train she pointed to the other side and said that our train had already left.

It was frustrating because now we needed to find a way to Krakow. We ended up hoping on the next train that we saw leaving to Krakow. Unfortunately for us, what should’ve been a 2-hour journey turned out to be a 4-hour train ride. This train was a very slow commuter train and it was absolutely packed that people were crammed into the aisles, and sitting on the floor everywhere.

Thankfully we managed to get a seat at the “cafeteria” and stayed there the entire journey. 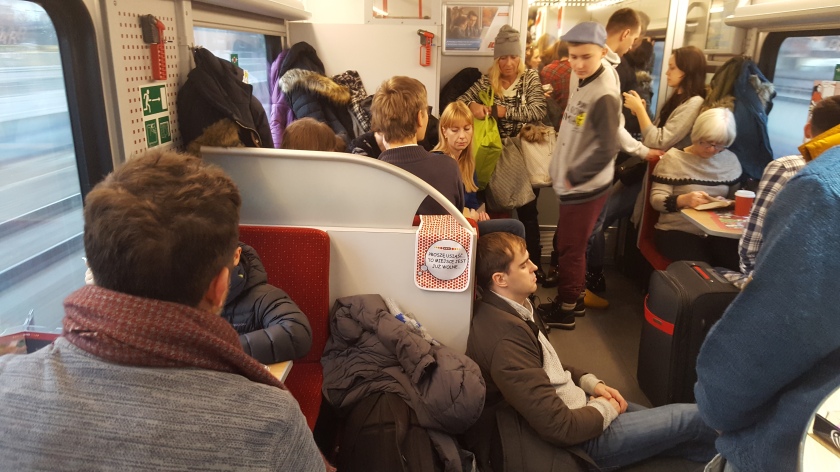 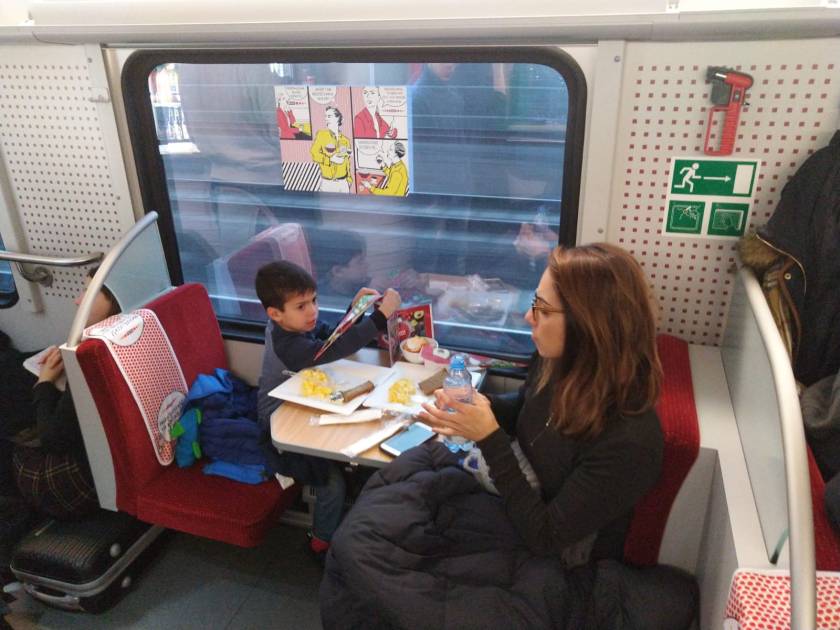 We knew about the salt mines through some cartoons the boys watched called “Go Jetters“. The Go Jetters visit various icons from around the world and save them fron the destruction of master Glitch. On one episode they visit the salt mines – UNESCO site since 1978.

We are already late from the long journey so we immediately get an Uber to the mines, arriving at approx 1:30pm. Entrance cost us $250PLN (approx $100AUD) for a family of four.

The tour begins with a descent of 60 metres worth of stairs deep into the mines. From there the guide explains the history, process, people involved and displays of an underground metropolis with extensive infrastructure.

The mine allows for many underground concerts, masses, weddings and other functions. The church being 130mtres deep.

Highly recommend the Salt Mines tour. One was blown away that this was built hundreds of years ago! The guides were knowledgeable and overall it is a place like no other. Just be mindful that the tour takes approx 2-3hrs, finishing with an interactive 3D video of the mine – amazing!

This is a place we have been wanting to come visit for a while. Having done Dachau 3 yrs ago, we would not miss our chance whilst in Warsaw.

What I didn’t know was that this area is actually called Oswiecim in Polish and was later adapted and changed by the Germans to Auschwitz (very similar pronunciation).

The Germans occupied this area and it became German property. When we asked the guide why didn’t other countries find them and attack them? She said that the implication was that England knew that there was something occurring in Poland, but didn’t know any exact location. Auschwitz just appeared as being in Germany.

So why in Oswiecim?

This was a very central city in Europe and easily accessible by train from other cities/countries. 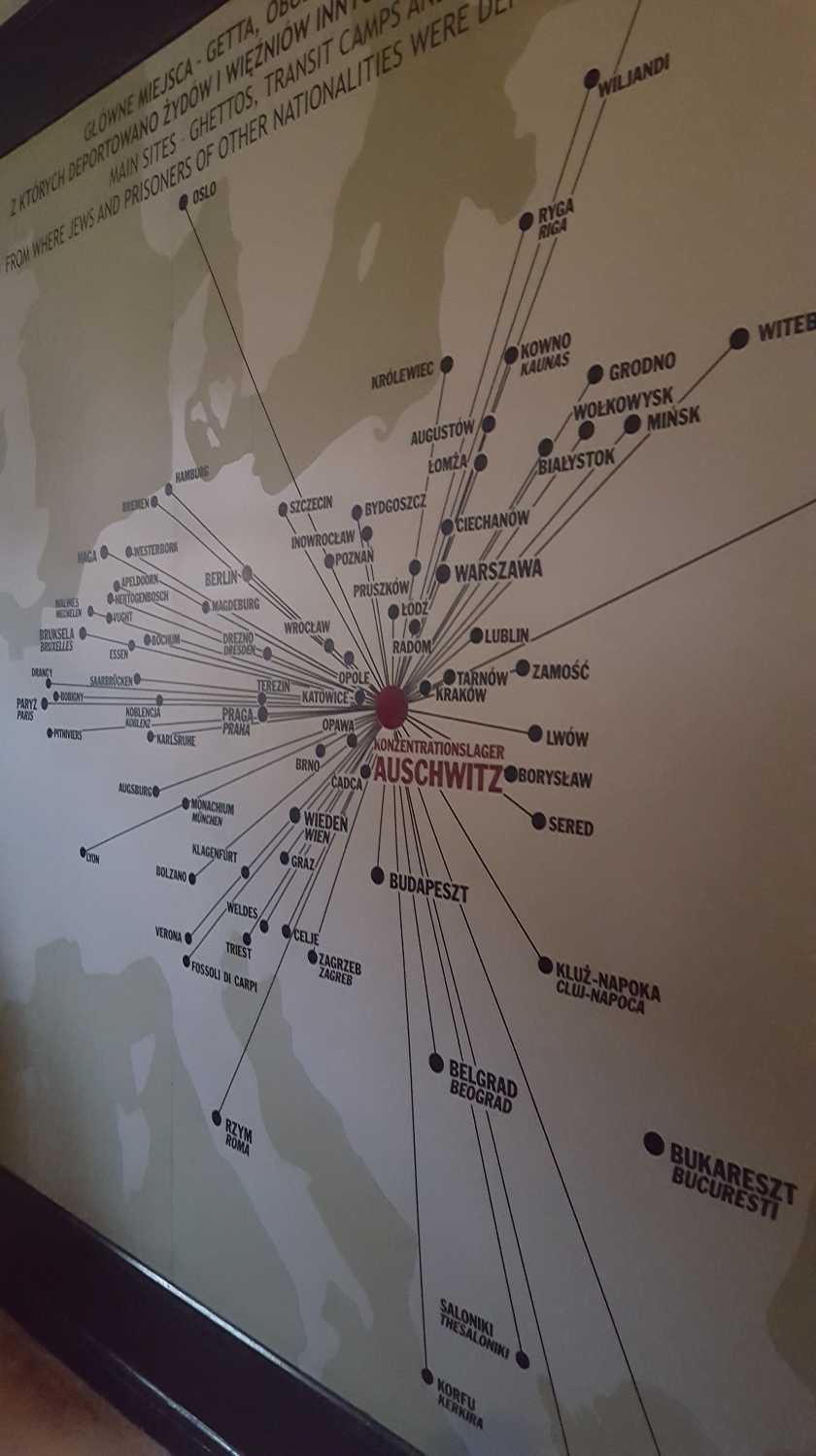 This place was built for a very specific purpose, and that was mass killings. There was no other reason to have a train line leading up to the gas chambers and crematorium.

Prisoners were taken out of the over crowded carriages, selected as fit or unfit. Those fit, would go to one side and literally worked to death (average life span on the camp was 3 months). Those selected as “unfit” would be sent straight to the gas chambers. 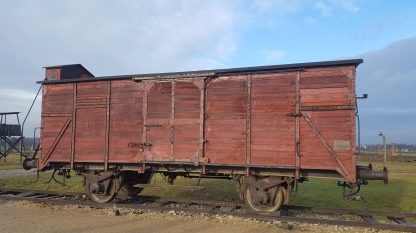 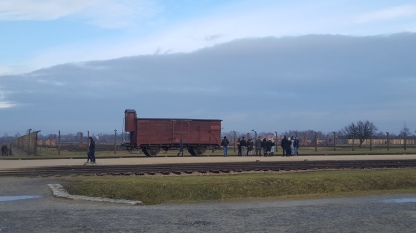 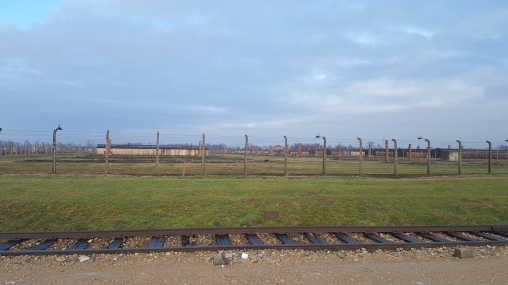 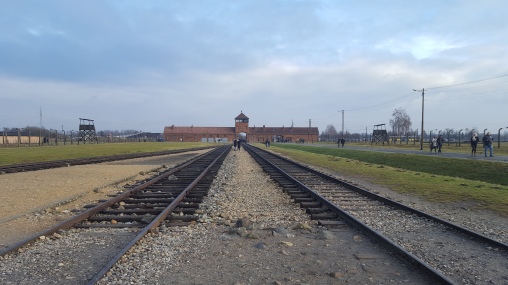 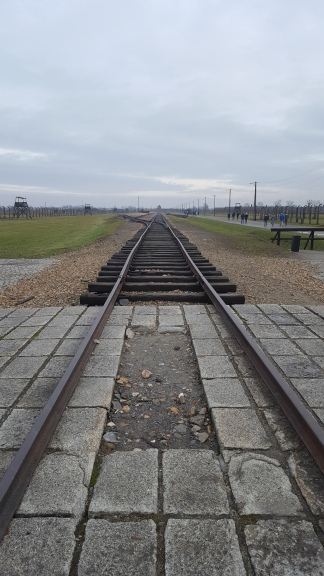 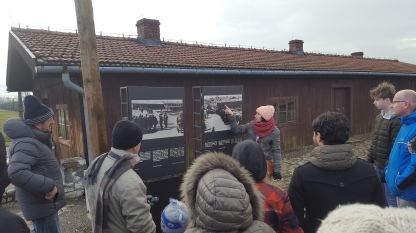 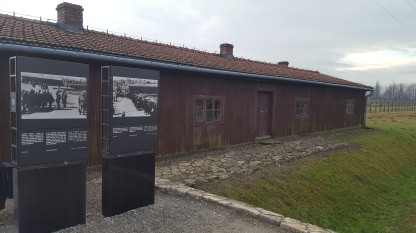 We were fortuitous upon arrival as the English tour was about to start at 10:30am. We started in the museum and worked our way through the barracks and things collected/donated from the time of captivity.

These items were very confronting, as they really personalised the victims and the atrocities that occurred. The following are images of reading glasses, shoes, suitcases/bags. Were not allowed to take photos of all the hair that was cut off the Jewish women – but there was an enormous amount of hair!

Our guide was exceptional. Just the right amount of factual information, survivor stories that was closely linked to the entire tour to help you understand the living conditions.

We got moved to Birkenau (also known as Auschwitz 2). This place is unbelievable. Not in a positive sense, but in a way that one would never imagine such a place exists. Unlike Auschwitz 1 that was originally went barracks and then adapted by the Germans to become concentration camps, Birkenau was constructed purely for extermination – a chilling thought.

Our friends in Poland were so friendly and gave us the best polish experience we could ask for. The boys will miss their dog Thiago. We just hope that one day they will come visit us in the land down under. 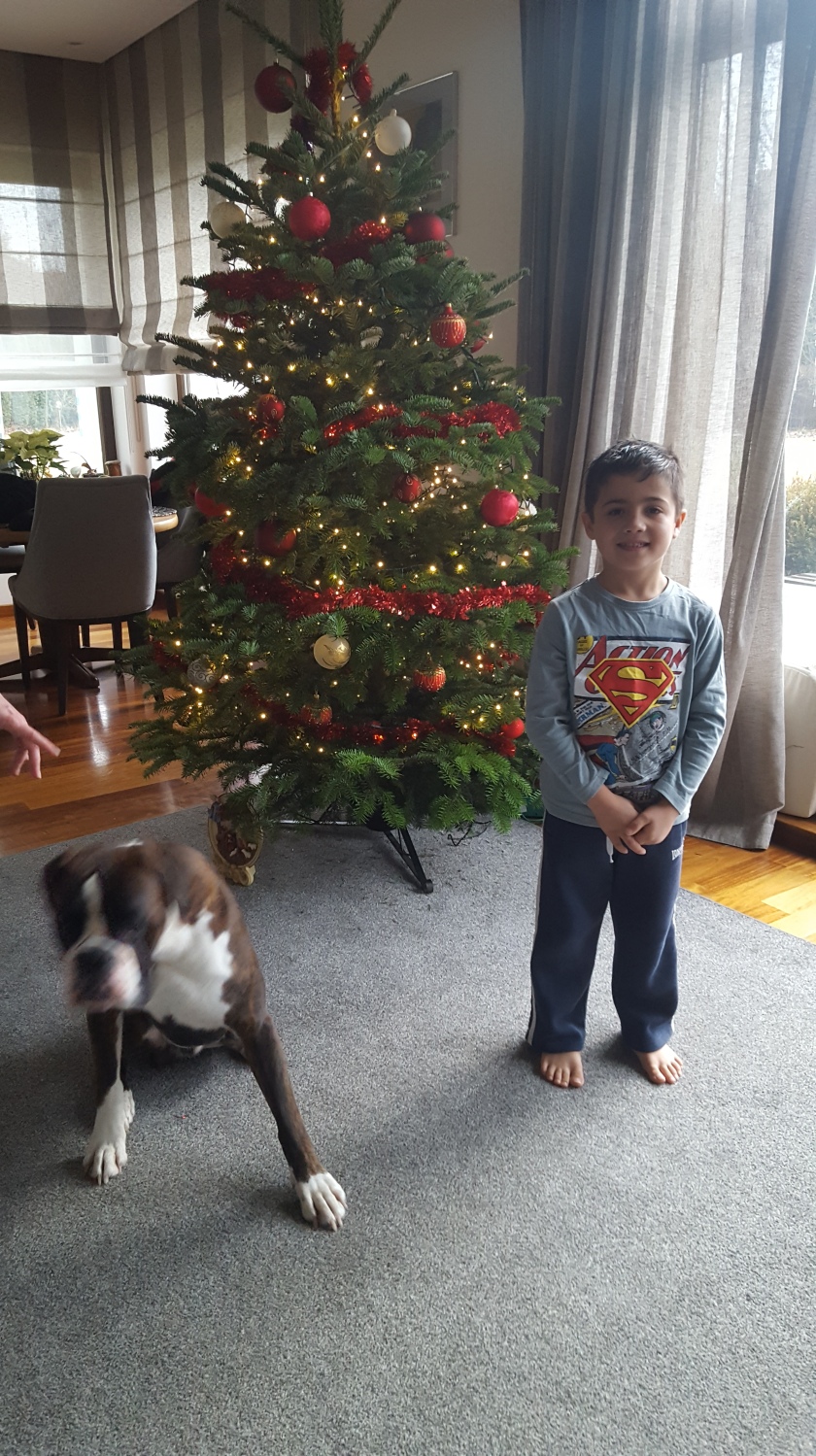 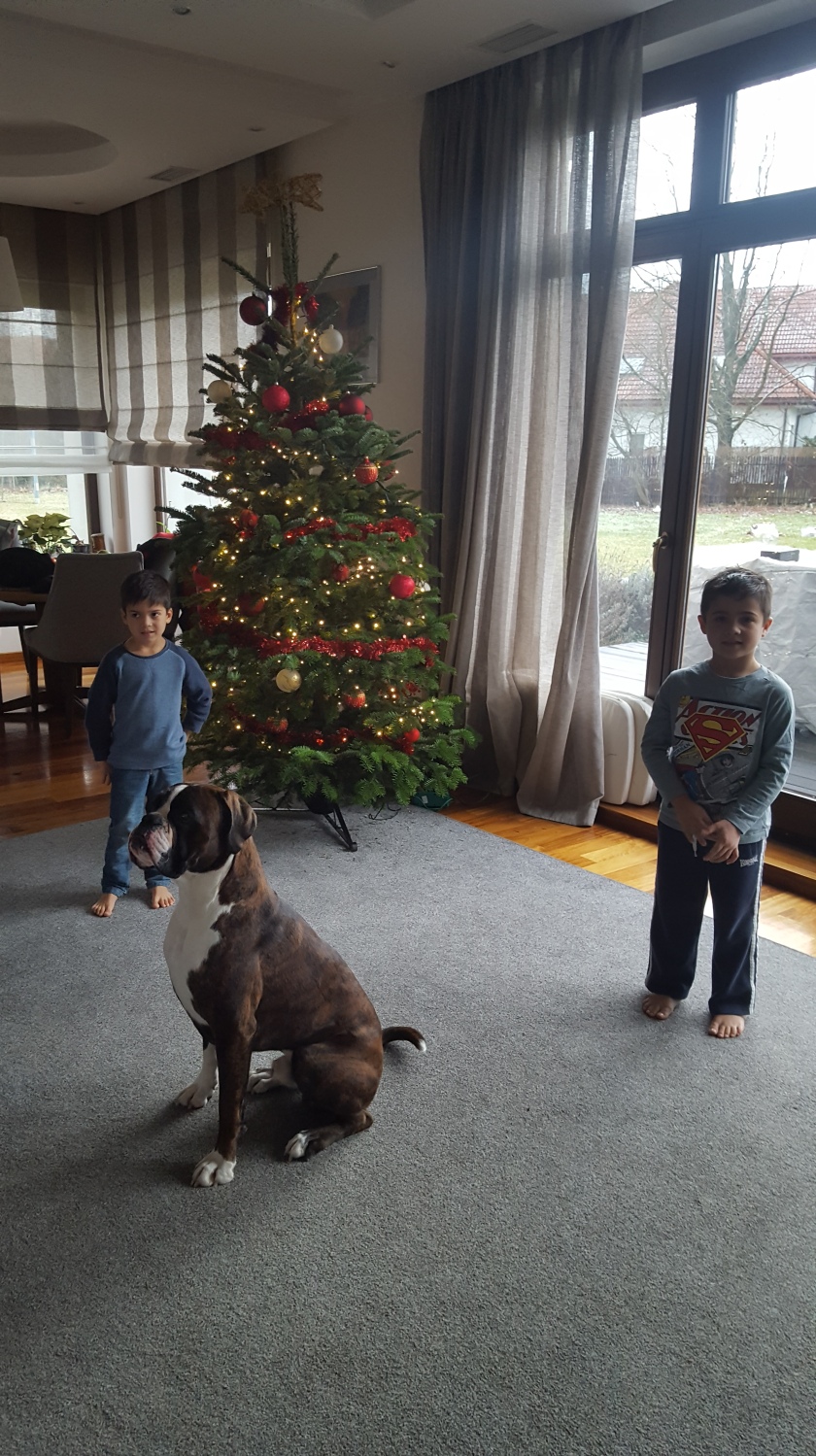 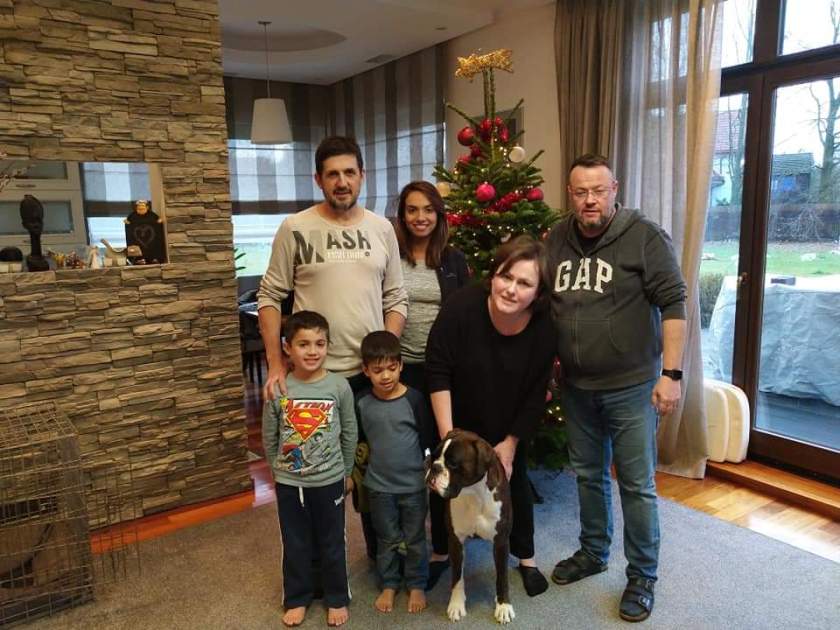 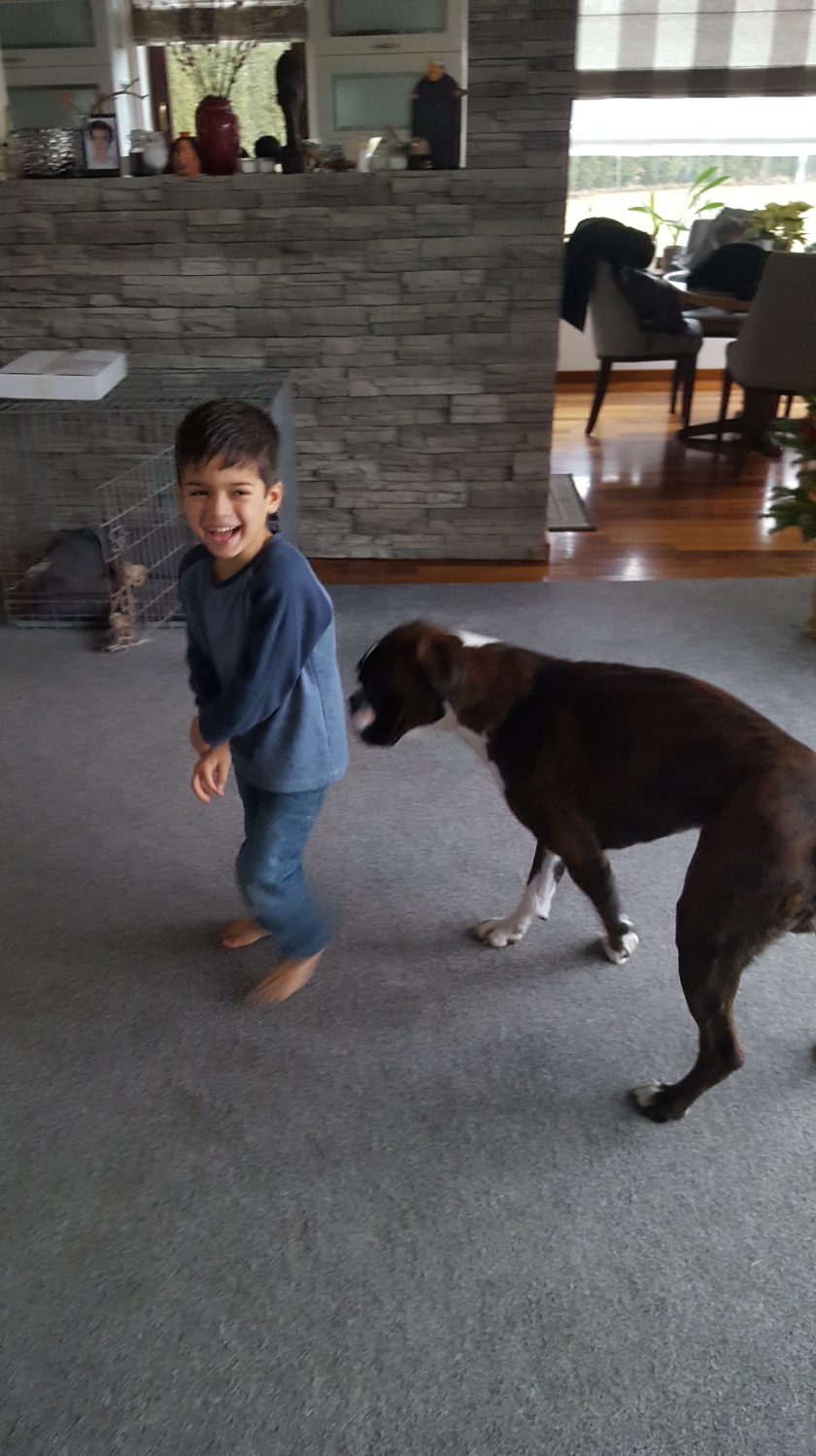 Poland, besides the trains running late, you were great – thank you! 😊