Our time had come to an end and though I couldn’t wait to continue the journey, I felt somewhat nostalgic when I realised that I would probably never see Vladimir again.

We left at approximately 9am and made our way back to Irkutsk. Vladimir dropped us off at our next destination and he urged the boys to come visit him when they were bigger. I hope they do. I hope they will one day trace the steps we took on this trip and reconnect with Vladimir.

Things to do in Irkutsk with little time

We arrived at a quaint little unit that I found the night before scrolling through Airbnb. It is close to the tram and quite central for a decent price. We paid $72AUD for the night, but you can get it cheaper. The host were extremely accommodating and will help you out with anything you need!

With only had half a day that evening to check out Irkutsk. We had lunch and spent the rest of the afternoon wandering the streets of Irkutsk. I wanted to look for a Russian hat or even some warmer boots that were typically Siberian. We found the
central market in Irkutsk. Lots of produce and meat, which were able to purchase or our next rain journey. Just on the outside of the building though were more shops and small clothing markets.

I found a pair of Siberian boots that seemed to be the fashion and I didn’t waste any time in switching to these. I fitted right in with the locals!

That evening we had dinner at an Argentine Steakhouse and had an early night because the next day we woke up before the crack of dawn (mind you dawn isn’t until at least 9am). I wanted to catch an Uber from the unit to the station, but the argument was that traffic could be bad and it would make us late. Also, we had a tram around the corner of the place and it was more reliable. I didn’t win this argument and so we walked to the tram stop and made our way to the Irkutsk station.

We were back on the train, this time for a two-day journey to Harbin. We knew what to expect and this brought about a sense of familiarity and confidence.

our cabin for the next two days

our stash of food 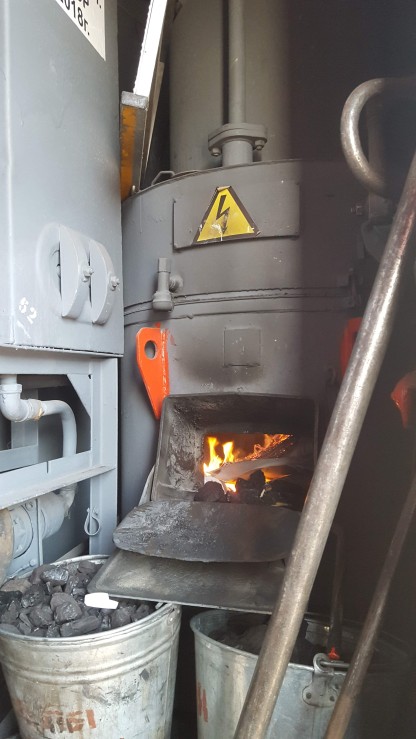 Lake Baikal as we travel along the train

Having porridge for breakfast 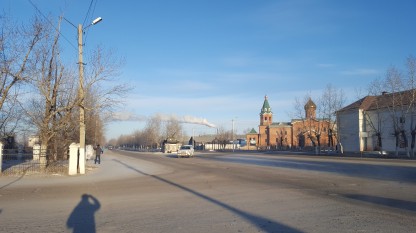 small town we stopped at 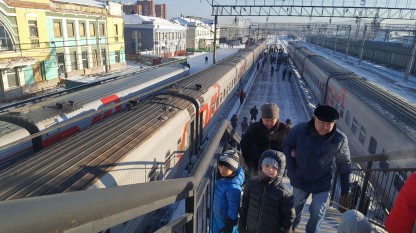 We finally arrived to our last Russian town called Zabaykalsk, which is the border town between Russia and Manzhouli, China. Zabaykalsk/Manzhouli is one of the three direct connections between Russian and Chinese Railways.  We had a 6 hour stop over here, so that the train could change over to accommodate to Chinese railway lines.

Zabaykalsk is a small town, with hardly any trees and no high buildings. We walked around and found ourselves in rundown, dry, dusty, pathless streets with dogs in every house barking at us. It wasn’t THE place to spend 6 hours in transit, but it was still very pleasant because the people in the corner shops were extremely friendly. We bought a Bilash for a snack, which is like an empanada with meat inside.

It was pleasant to stretch the legs, but I was keen to get back on the train and continue our journey. We had another 6 hour stop in Manzhouli, China and we were hoping to grab dinner there and check out the town.

How wrong we were!

Crossing the border from Russia to China was like living two extremes. On one side we were able to get off the train and check out the town, there were no high buildings, it was pretty empty, and even ‘the arc’ in Russia was simple and unassuming.

In contrast, upon entering China we could the Chinese arc that poo pooed on Russian arc. A symbol of extravagance/greatness, right through to the tall buildings and beautifully lit up city of Manzhouli. There was no denying that we were faced with two extremes between Zayabakalsk and Manzhouli.

We entered a communist country, and oh how we felt the difference! We didn’t feel welcomed like we did in Russia. As we arrived, we were herded off the train, told the train toilets would be locked, we could not leave the station and went through very rigorous and strict customs. The young Singaporeans that were in the cabin next to us were also hoping to go grab dinner downtown, but we were all very disheartened when we were told that due to strict laws we were not allowed to leave the premises. The Chinese officials told us we could grab dinner in the restaurant upstairs from the station, but this was just a pitiful corner-type store with guess what? – some packet noodles!

We arrived in Harbin and didn’t waste any time. Our place that I found on Airbnb was at 道里区霞曼街55号. We had some issues here because on the second day the electricity blew up and we had no wi-fi and Mr 5 decided to wee the bed so I couldn’t even wash the bed sheets! Nonetheless, the hosts were very accommodating and helpful that we didn’t mind.

We didn’t wast anytime (as always) and we headed straight to town to explore the snow and ice sculptures all around the city. 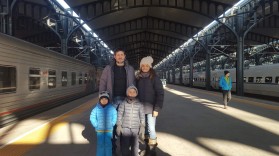 Inside the station – it’s enormous! 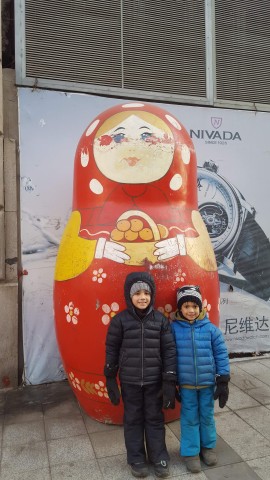 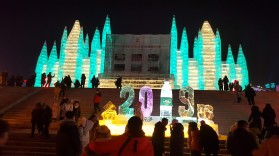 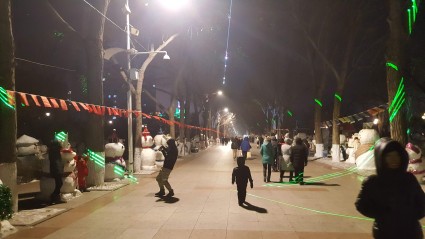 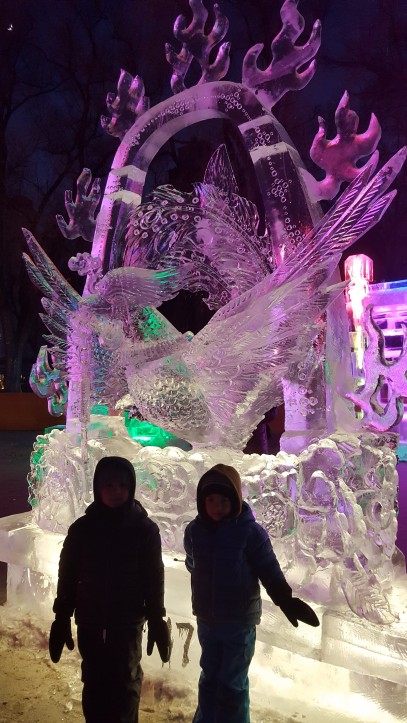 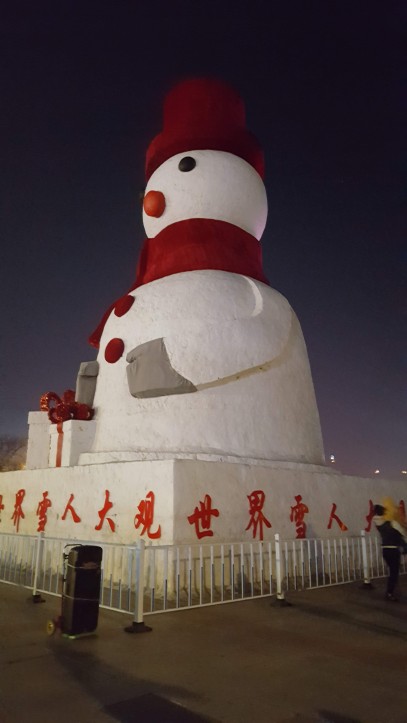 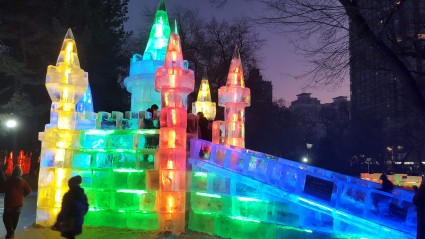 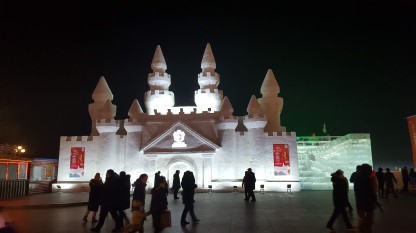 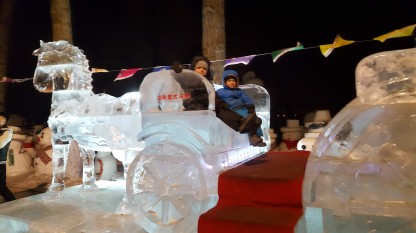 That evening we had dinner in a hidden restaurant that we happened to find by chance. It was hands down delicious and great value for money!

The next day was busy. Unfortunately we didn’t choose very well and our breakfast was spoiled by food that was not at ALL appetising!

We went to the snow sculpture festival, caught the cable car over the river, had dinner and then caught a taxi to THE ice festival on the other side of the river.

The Snow and Ice Festival was most impressive! If you’re unsure whether to visit Harbin, I recommend it visiting in winter!

The photos speak for themselves. 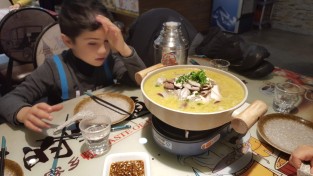 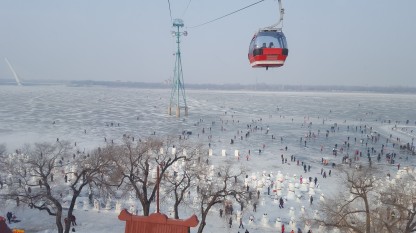 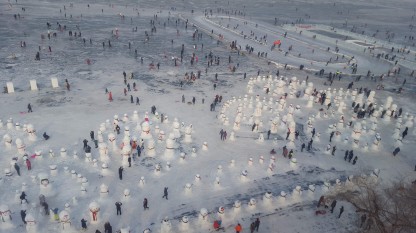 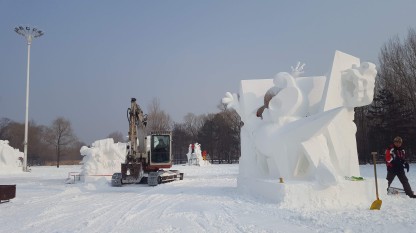 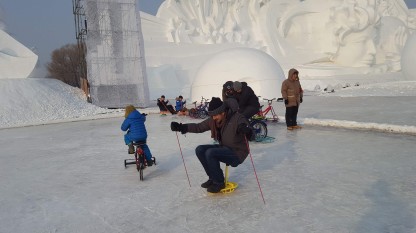 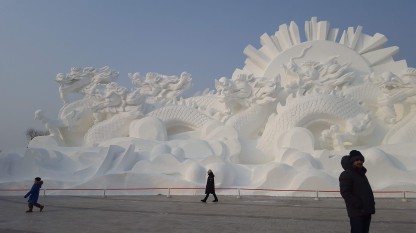 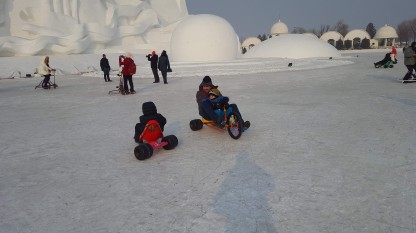 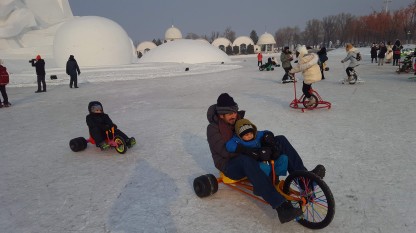 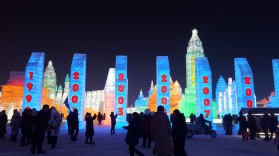 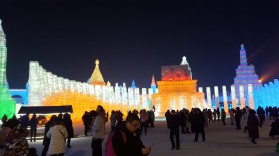 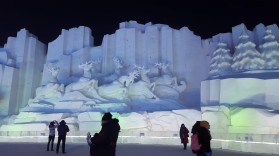 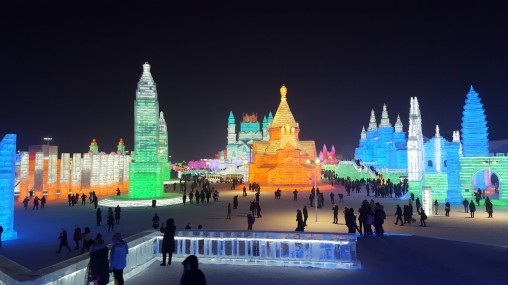 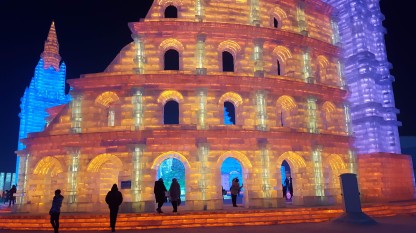 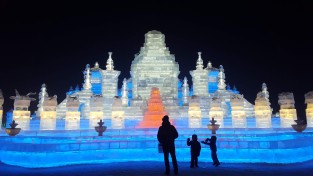